President Clint Cointment at the microphone, surrounded by the six EA Drainage Commissioners who voted to withdraw his authority on June 28 (with EA Drainage Vice President, Chase Melancon)

A few moments ago, President Clint Cointment and some members of East Ascension Consolidated Gravity Drainage District # 1 (the District) announced a tentative 12-month agreement whereby Cointment would retain authority over drainage works on the east side of Ascension Parish. Negotiations resumed yesterday and an agreement was reached on Tuesday evening. It comes after President Dempsey Lambert’s letter, sent on Thursday, informing Cointment of the district’s intention to terminate the existing agreement under which the parish president exercises authority.

“We have all made concessions,” conceded President Cointment, who admitted “differences of opinion” but promised to “respect each other’s differences as we work towards a common goal.”

Joined by EA’s six Drainage Commissioners who voted to strip him of his authority on June 28, along with EA Drainage Vice President Chase Melancon, it was a self-congratulatory exercise without a hard word pronounced. The outwardly cordial mood belies the tension surrounding parish government procedures since the June 17 vote to approve a 9-month moratorium on the property subdivision (Cointment insisted it be for 12 months).

His palpable disgust was not masked and accompanied by overly provocative statements as emotions took over him. Smelling blood in the water after this spiteful procedure, the council sharks attacked almost immediately.

Relying on the president’s public defiance as justification, six of them voted to strip Cointment’s authority over drainage. But they exaggerated their game, ignoring the overwhelming pro-Cointment sentiment expressed by a chamber full of citizens on June 28.

All six were targeted for a recall soon after. And now they’ve blinked. Regardless of the explanation for the brutal overthrow, the terms preserve Cointment’s powers, for at least 12 months.

“We have always wanted to move forward together,” said Council President Teri Casso, whose actions do not corroborate the assertion. “We all had to make efforts in good faith. “ 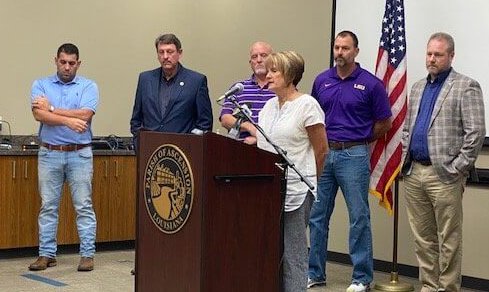 The President of the Council Teri Casso at the microphone.

Hard to swallow given that four council members claimed they were left out before the June 28 debacle. Four others said they were completely surprised by the termination letter from the president of EA Drainage Lambert of September 23.

At 4:20 p.m. today, all seems forgiven, although we find it hard to believe that the events since June 17 will be forgotten anytime for the foreseeable future. But the parties have come to an agreement, at least in principle.

The District has yet to vote to approve the titled document; Addendum to the Existing Contract MANAGEMENT AGREEMENT. Its operational provisions can be found under the title, OBLIGATIONS OF THE PARTIES, which includes among its 17 paragraphs:

B.1. The EACGDD hereby grants to the office of the president of the parish, his heirs, successors and assigns, the exclusive right to administer the maintenance, operation, repair and provision of drainage for the parish of the ‘Ascension and all the dependencies related to it.

B.2. The EACGDD hereby grants to the parish, through the parish president, the full right to use the easement rights, including, but not limited to, the right to build, maintain , inspect, operate, repair, modify, remove and relay the drainage system and ditches and canals using EACGDD equipment and accessories that may be necessary and practical for such operations, as well as all rights of entry and exit to and from said drainage systems, ponds, ditches, canals, etc. for the purposes for which the EACGDD was created subject to the advice and consent of the EACGDD.

On June 28, the district voted “to establish the post of CEO of East Ascension Drainage District No. 1” in a proposal that excluded the parish president from operational control after the current intergovernmental agreement expired. . This expiration was reportedly on November 22, after 60 days’ notice had passed since President Lambert’s letter of termination on September 23. Cointment and his administration would have been tasked “to continue the administration functions within the framework of the annual fee of 4% with additional conditions.” as to the separation of personnel and property.

All parties concerned had already conceded that hiring a drainage “expert in the field” would be a good thing. In pursuit of this noble goal, the current proposal includes:

B.3. The parish president will work with SSA Consultants to create an organizational structure, define criteria for finding a drainage director, and conduct a national search for a drainage director to be presented to the EACGDD for ratification within 60 days in as an additional scope of work to that of SSA Consultants. professional services contract with the parish.

B.4. Ascension Parish Council will vote to establish the new position with a salary range of $ 135,000 to $ 210,000 per year or an amount corresponding to market-comparable compensation and ask SSA to adjust the employee organization chart to reflect this new post.

The document calls for the establishment of a “performance-based contract for the post of Drainage Director … A professional review committee will be established by the parish president and EAGCDD, with each party having two appointments. . This board will recommend the top 2-4 candidates as finalists for the Drainage Manager position. The final selection will be approved by a qualified majority of the EAGCDD Board of Directors.

B.13. The president of the parish should ensure that the director of drainage provides quarterly updates on drainage personnel, including number of full-time equivalent employees, current payroll including benefits, costs of overtime and trends when hiring the drainage manager.

The conditions would deprive the ward president of the ability to fire employees and spend money, unless they had first been approved by the district. Nor would any public communication be permitted without the approval of the district and such “public communications regarding drainage will be issued jointly between the EACGDD and the parish president.”

According to President Cointment, the deal will be reviewed for approval at EA Drainage’s next regular meeting on October 11.